In time for the 10th anniversary of Marvel Studios, Beast Kingdom releases statue based on retro and classic scenes from Marvel Comics as part of our D-select series of the Exquisite Scenes collection.

With his Infinity Gauntlet, the Mad Titan Thanos has the power to decide the fate of the entire universe. Regardless of whether in the movies or the comics, he will give the fans a real bloodfest! Going back to the classics, we give you the most extreme and savage tyrant of the original comics.

The figurine is of Thanos in the middle of a fierce war, the victory within his grasp due to his possession of the Infinity Stones. Standing in the top of ruins and wreckage, and with a triumphant look on his wicked face, he has gathered a huge amount of power in his hand – just waiting to release it. The special paint and the multi-layered painting technique make the scene and character even more lifelike. 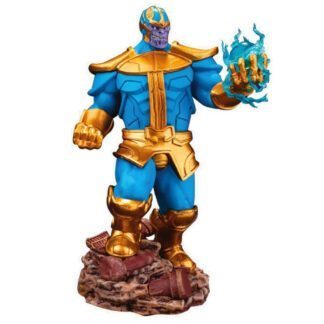